I blame it all on my husband. If he hadn't decided to change careers four years ago, I might never have made my own move. But watching him return to full time study for the first time since his teens, seeing him really sink his teeth into a new vocation and do well at it, and then witnessing his satisfaction (and yes, exhaustion) in his new occupation, made me start questioning my happiness in my own. Fortunately, the stars aligned, and aided by a firm nudge from both him and my friends, I started on a new path of my own. I'm currently one-third of the way through qualifying to become a high-school English and Humanities teacher.

I'd always had the idea of teaching in the back of my mind - it was something I thought I'd look into 'later on'. I'm glad I didn't wait any longer - the past six months have likely been the most challenging and rewarding of my life so far, and I've done some pretty challenging things. It's been like learning a whole new language, learning to re-wire my brain, and learning to listen and observe and be present in a way I'd never thought about before. Needless to say, it's also been the most exhausting six months of my life, too.

During semester, I've been trying to keep my hand on the hook as often as I could, even though sometimes I'd feel guilty about it - but the husband stepped in and quashed that hyper-critical inner voice of mine and reminded me it was all about balance. So I still managed to fit in episodes of MKR and MasterChef whilst crocheting a granny stripe blanket in the summer holiday shades of browns, greens and blues. I like how the blanket is getting heavier and heavier the bigger it gets, and how it's now big enough to keep me warm while I add to it, stripe by stripe. 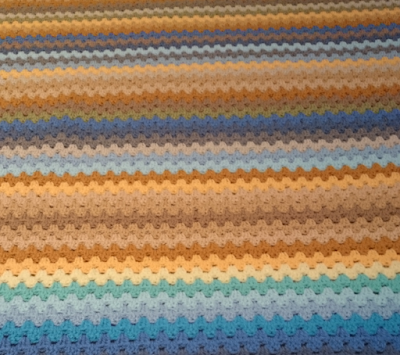 I also had Craft Camp to look forward to, booked in for the first weekend of holidays; even though that was weeks ago now, it still warms me to think about it - two whole days of crafty creativeness with nine lovely ladies, in a cosy country cottage built just for getaways of the type. All day and most of the night spent practising old and learning new crafts, making new friends, laughing, sipping tea and wine and swapping stories. It was so good, I had to force myself to go to bed and get some sleep. But who needs sleep when there's so much fun to be had, right?

I had wanted to try making little crochet skulls - there's a pattern for a day of the dead skull motif I'd had my eye on for a while. My first couple of attempts were fit only for the grave, but I soon had the pattern down - though it wasn't long before I started planning tweaks to the pattern. This resulted, of course, in me obsessively going over and over the pattern till I got something more aligned with the picture in my head. So I went from this: 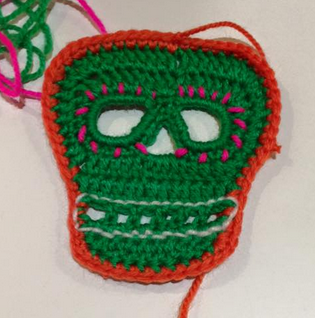 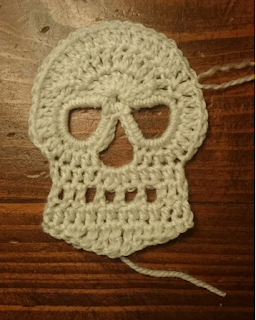 Even though the second skull looks a little like a storm trooper, I like the way it's rounded and has more height at the top, and the fact that it has cheekbones and jaw bones. I'm still playing around with the pattern, but once it's done I'm going to try and write it down - maybe it'll be my first contribution to Ravelry.

I'm off to watch Netflix and crochet on the couch. A week and a bit of holidays left before we jump back in to study, and I plan to hook my way through as much of it as I can.

The weather is turning here - there's a definite crispness creeping in, and though it's lovely and warm in the sun (when it's out), a passing cloud or a patch of shadow elicits an audible 'brrr!' and a quickening of step. It's time to break out the flannellette sheets, time to switch back to the slow cook. It's most definitely baking weather.

I've not baked for a while, and this weekend I compensated for it; a surprise petit apple pie on Saturday, and a batch of chewy ginger cookies on Sunday. The pie was a surprise in that there was some shortcrust pastry in the fridge, leftover from my last pie caper, and a bundle of granny smiths in the fruit bowl. I decided at dinner prep time that we'd have apple pie for dessert, so some chopping, rolling, freezing, and baking later - surprise! Apple pie!

The ginger cookies had been in the back of my mind for a while, and today I decided they'd come to be.
I found a gorgeous looking recipe at fork knife swoon, and set about tweaking it to my particular taste and pantry. I wanted the ginger to really shine, so I added a handful of minced Buderim Naked Ginger pieces to the mix to add kick. I subbed the molasses for golden syrup, because that's what I had in the panrty; and as for the spices, I omitted the clove because I felt like it. 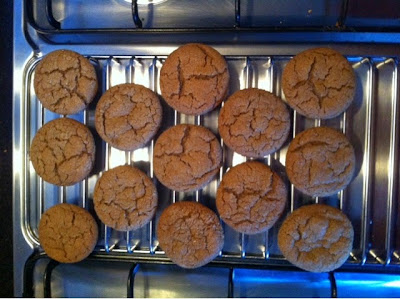 The finished cookies are just as they should be - sparkly and crackled on the outside, chewy and soft within, maintaining a warm glow long after the oven's cooled. A pair of these would be lovely clamped around a scoop of good vanilla ice cream (and what doesn't go with good vanilla ice cream?); as lovely as they are, I'm sure, with a cup of lady grey, as I happen to be having them now. 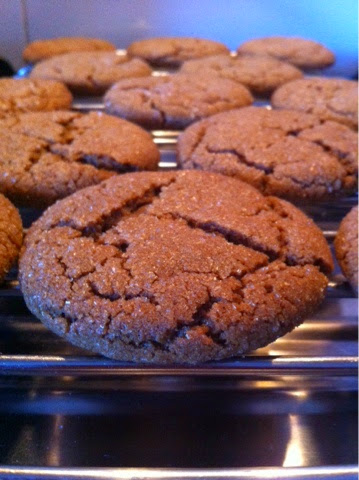 Tart with a heart.

I'm often asked to bring desserts when there's a family gathering happening, and I'm always happy to oblige. It gives me an excuse to scour google for something luscious, or go back to tried-and-true crowd pleasers. Otherwise, desserts can be dangerous in this house - just us two, plus one huge cheesecake (or equivaent) in the fridge can take on the look of a grim challenge by day three. So, having a guaranteed flock of mouths to feed is my insurance, and gives me carte blanche to whip up something decidedly decadent.

This past weekend, we went away with some friends to the beautiful Ellis House, and I volunteered to make dessert. Taking into account the levels of indulgence we'd likely soar to over the weekend, I decided to make something light, tart, and full of antioxidants - a fruity galette.

Its rustic, freeform spirit just seemed to suit a weekend away in the country.

I adapted the Plum Galette recipe from Food & Wine, with the following changes: for the filling, I used 5 tablespoons of almond meal, and added the seeds of one vanilla bean; for the fruit, I used around one dozen plums, a bowlful of cherries, and a punnet of blueberries; and instead of sprinkling on third cup of sugar over the fruit and the edges of the rolled-over pastry, I used barely half that amount. And I didn't dot butter over the top, because I forgot to.

I also omitted the jam glaze at the end, because I just didn't think it needed it. Served with generous dollops of double cream, this tart provided a memorably zingy end to a lovely evening. 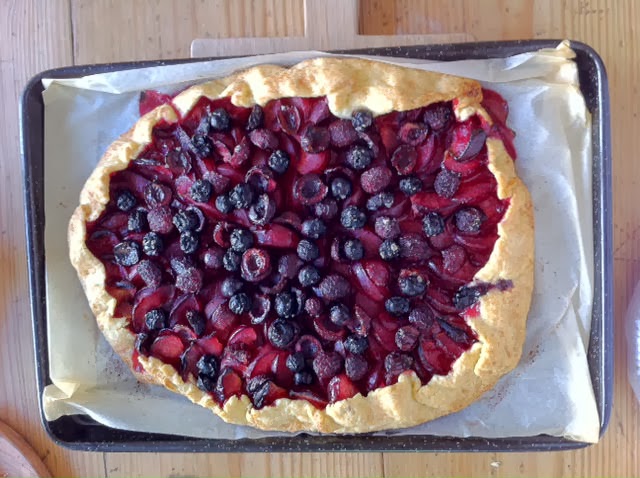 You could pretty much use any fruit in season to fill a galette. The drive home through winding country roads was spent dreaming up new combinations - banana and brown sugar, with a squeeze of lime? apple? pear? apple and pear? - though I'd love to do one with just morello cherries and cinnamon. Pumpkin would be nice, even.

The best part? There was just enough left for the two of us to share when we got back home.

Posted by shalini akhil at Tuesday, January 28, 2014 No comments:

Oh, I do like to be beside the seaside...

I did think of waiting for the weekend to pass and posting an update after the 29th so I could pretend that no, a whole year had not passed since I last blogged. But the urge struck, and I thought, best to just go with it. So here I am, going with it. 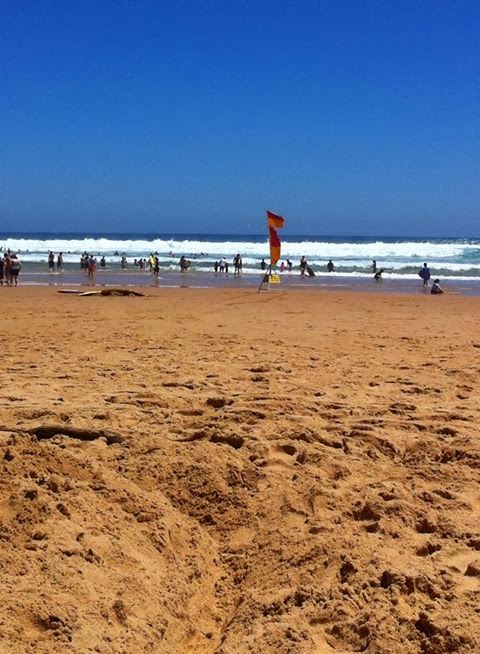 I've just returned from two weeks by the sea. I spent some happy, squinty hours on the beach, watching the dumpy surf pick up my niece and nephew, sometimes tackling them, engulfed in a swirl of foam and sand, sometimes swelling up under their tiny bodies and boogie boards to deliver them, shrieking with delight, all the way to the shore. My youngest nephew, too little to tackle the surf on his own, was content dig-dig-digging the damp sand, and diving chest-first into single-bucket sandcastles as quickly as we could unmould them.

We found a flatter beach on the second-last day, and even though it was going to be a scorcher, the possibility of close encounters with local sea-dwellers had us camped on the narrow beach before midday. Wading out to hip-depth, I watched as my husband attempted a swim to the sandbar out ahead of us; the flatness on top of the water concealed a current. I watched as he drifted further and further to the right, then out of my field of vision. I quelled the predictable panic, and seconds later he appeared at the top of the stairs we'd used earlier to access the beach; "That undertow is strong!"

I love the different shades of blue the seaside showcases. At the dumpy beach, the waves rising and cresting in the distance took on an opaque opal brightness just before they crashed into froth; bands of teal and aqua and ultramarine between there and me till the swirl of muddy brown at my feet, retreating to crystal-clear, anchoring me deeper and deeper into the wet sand till I'm happily stuck, watching schools of fish dart back out to deeper water, invisible but for their sleek shadows.

The flat beach offered moodier tones than the dumpy one, starting off clear and descending quickly into inky-blue darkness. I watched neat clumps of seaweed glide past under the surface, sailing neatly around our legs as if steered, little islands on the move to somewhere specific. The small beach, empty but for the two of us and a young family of four, was the perfect contrast of brisk water and scorching sand. As we stood side by side, looking out to the patch of black where the sea floor dropped away, a strange thing happened. A piece of the blackness separated from the rest; a patch the size of our dining table. It broke away and began slowly, deliberately gliding toward us. This was not the shadow of a kite; it was a local resident. A stingray. We followed in awe as it glided past us, and away.

Apparently stingrays are quite common in the area, though I still feel  little glow when I think about it. Like I've been let in on some sort of secret. 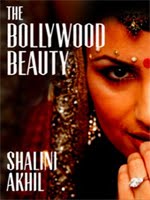 shalini akhil
i am an indo-fijian scribbler based in melbourne. i write fiction and creative non-fiction. i cook, crochet, and have dabbled in standup comedy.